RNL is an openly collaborative and solo project for experimental sound, art, and ideas. Started in the early 1990s, it initially focused on tape experiments, collage flyers, and performative actions. This was hardly thought of as “art” at the time—they were simply weird and interesting things to do. Little of the work was shared outside of the handful of group members, some of whom never met each other, or even realized they had participated.

This model of open collaboration continues up to the present day with Conquering King Kong, RNL’s first publicly available release.

Conquering King Kong is a 45-minute trail through mental states and thought patterns, an abstract audio film that unspools with the logic of a dream.

Woven together from a massive archive of tapes, the album builds ambient spaces and puzzling sound objects out of location recordings, found sounds, private performances, and endless analog and digital manipulation.

RNL sound and visual archives reach back to the early 1990s. In addition to the new releases, older works will soon be available for listening to from VONCONFLON. This material is all previously unreleased. Forthcoming titles include RNL LIVE 4-19-92, GEORGE III’S LATER YEARS, and #4: DECISION MAKING. More info and downloads coming soon... 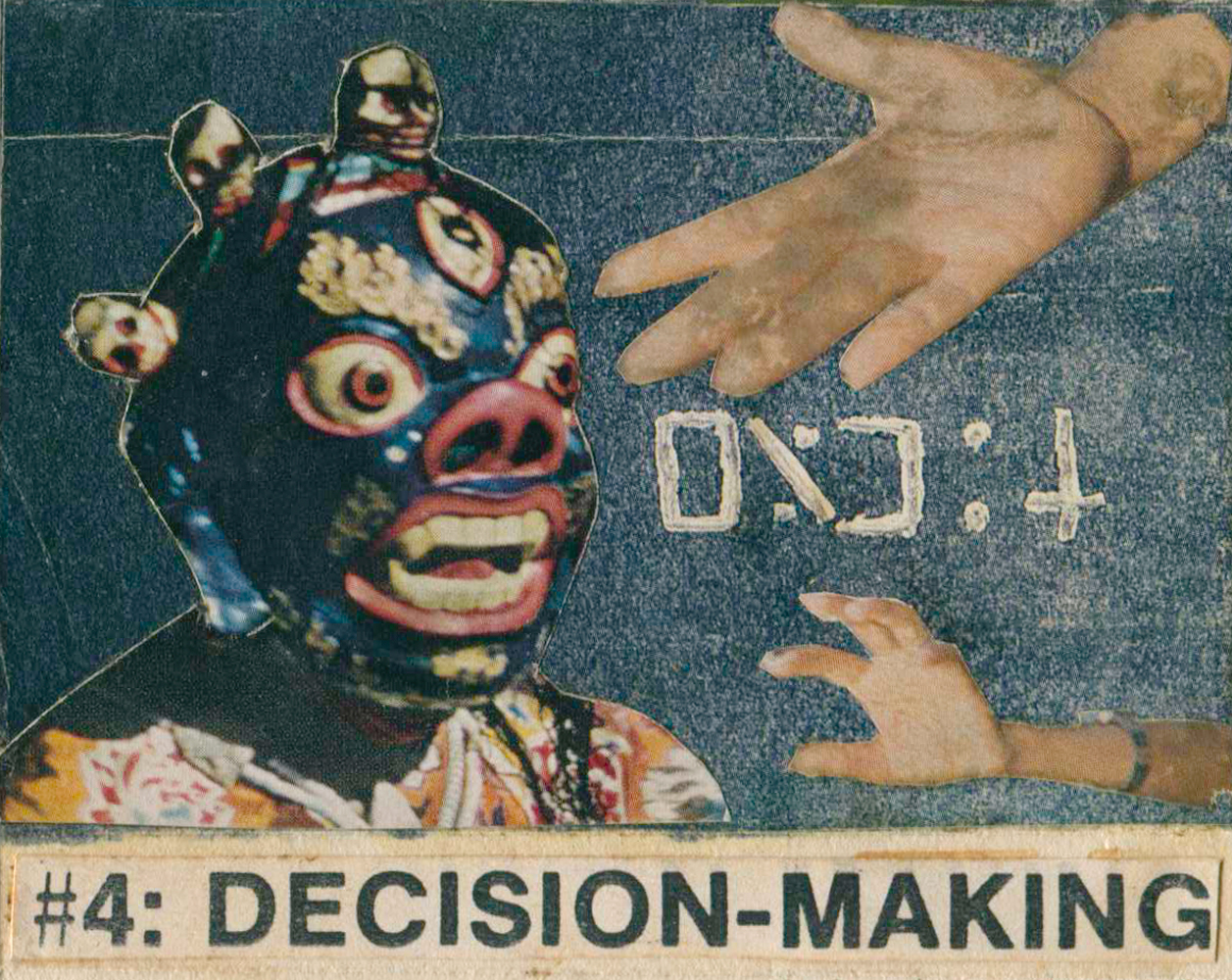 
The RNL zine is a current visual and text project, incomplete for the time being. A periodic multimedia anthology with a variable philosophy. In each installment, RNL expands its three ciphers into a new platform for the development of meaning. A temporarily assumed identity decides the thematic direction for each phase.

Here you will find previews of each issue as they become available. Ordering details hopefully available soon.

You may preview this issue’s full introductory manifesto here.

The desire for gnosis, for truly deep, direct spiritual or mystical understanding, is the elemental human drive, preempting even basic needs for sustenance and shelter, though this relation is commonly misperceived. Most famously, Maslow’s widely accepted model, the Hierarchy of Needs, asserts that only when basic physiological and social functions are maintained, can higher, more abstract desires be addressed. This arrangement exactly inverts the actual order of priority. Were physical and social security the true foundation of human existence, history would be a record of the perfection of the means of cultivation, distribution, and protection of life’s material aspects, and by today, after thousands of years of civilization, we would have it all pretty much figured out. Utter nonsense, of course.

Deeper meanings and mythologies have always provided humanity’s motives, its collective reason for getting out of bed in the morning, while complicating its performance. Belief systems of every variety issue arbitrary codes of behavior and morality, not based on mere utility. In this way, matters of ultimate meaning set the course for action; they do not wait for material and social circumstances to be in order. From this longer perspective, at a collective scale, our highest concerns clearly determine our behavior and our approach to survival, not the other way around. The same holds for the individual. Our desire for gnosis underlies our existence at every step.

Religions and spiritual systems often describe the gnostic process through metaphors of sleep and awakening. Those who have not had the primary religious experience may be described as “asleep,” unaware of the spiritual truth of existence, and therefore living as if in a dreamworld. The call “Sleepers Awake!” encapsulates this image in the summons to divine understanding or self-fulfillment. RNL, a platform for experimental art, text, and sound, receives and broadcasts this call.

Yet, what is wakefulness exactly? Compared to sleep, it is difficult to define. Sleep is easy to identify—a specific body state—while wakefulness can only vaguely be approached as everything that isn’t sleep. Most troublingly, while we are asleep, we can not reliably judge which state we’re in. We surprise ourselves, suddenly waking up, when we thought we’d been awake all along. Here lies the problem: how to identify and promote a truly wakeful state.

A decisions theorist was riding in a car while his wife drove. When she made a turn, he chastised her: “You didn’t use your turn signal!” “What’s the big deal?” she answered, “No one else was around.” “You mean you have to decide whether or not to use your signal every single time you turn? What a waste!” he replied. “Imagine how much of your brain you’d free up if you just signaled every time!”

The lesson is obvious: automatic responses liberate the mind for higher functioning. Instead of making thousands of decisions about the turn signal, we need only one global decision, a response pattern for all cases. In this way, we are like modern factories, where basic choices and movements are delegated to robots, performing efficiently and without fatigue or risk of bodily harm, leaving the human workers to focus on more complex questions of management and design.

But, wait a minute—shouldn’t the decisions theorist and his wife have been relaxing with a cocktail in the back seat? Why are they arguing about turn signals in this age of driverless cars, already established as far safer, more precise, and more efficient than human drivers? As humans are freed from the physical responsibilities of manufacturing, the result is a steady increase in the level of sophistication of what we can make, an apparently limitless recursive process of rising complexity. Each time we install automation at our current level, we displace ourselves upwards, and begin engineering the new products that result from the next level of automation.

Robo-Noetics applies this process to human thought itself, enabling us to push ourselves toward ever higher levels of understanding, to the ultimate wakefulness we seek. It is a vehicle, like the driverless car, transporting us from where we are to where we want to go, not even requiring our attention. It is both the intention and the agency, the designer and the executor, continually creating each other. It is the method which will lead humanity to the highest abstract material of thought, eventually reaching a permanent state of cosmic, universal consciousness, far beyond conscious cognition and rationality. Because Robo-Noetics is infinite growth, once set in motion, it encompasses everything. Robo-Noetics is therefore gnosis itself. 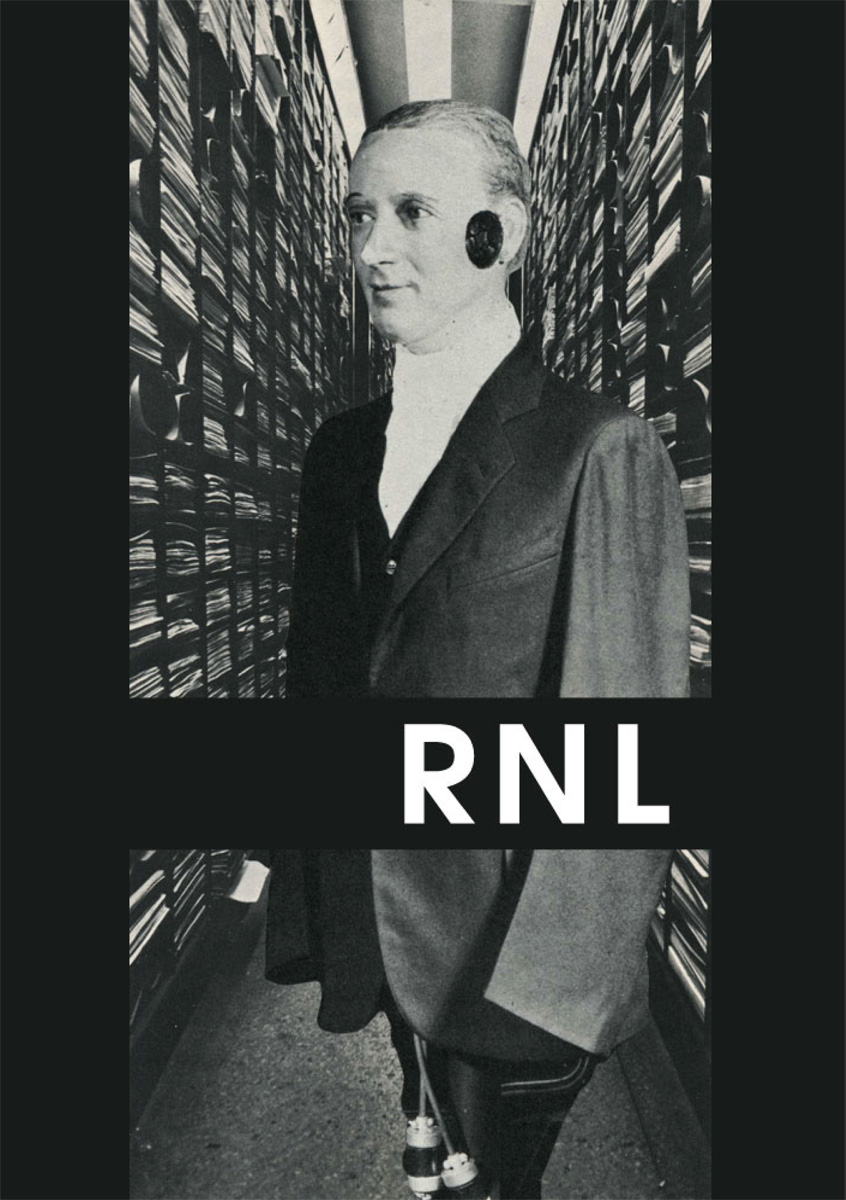 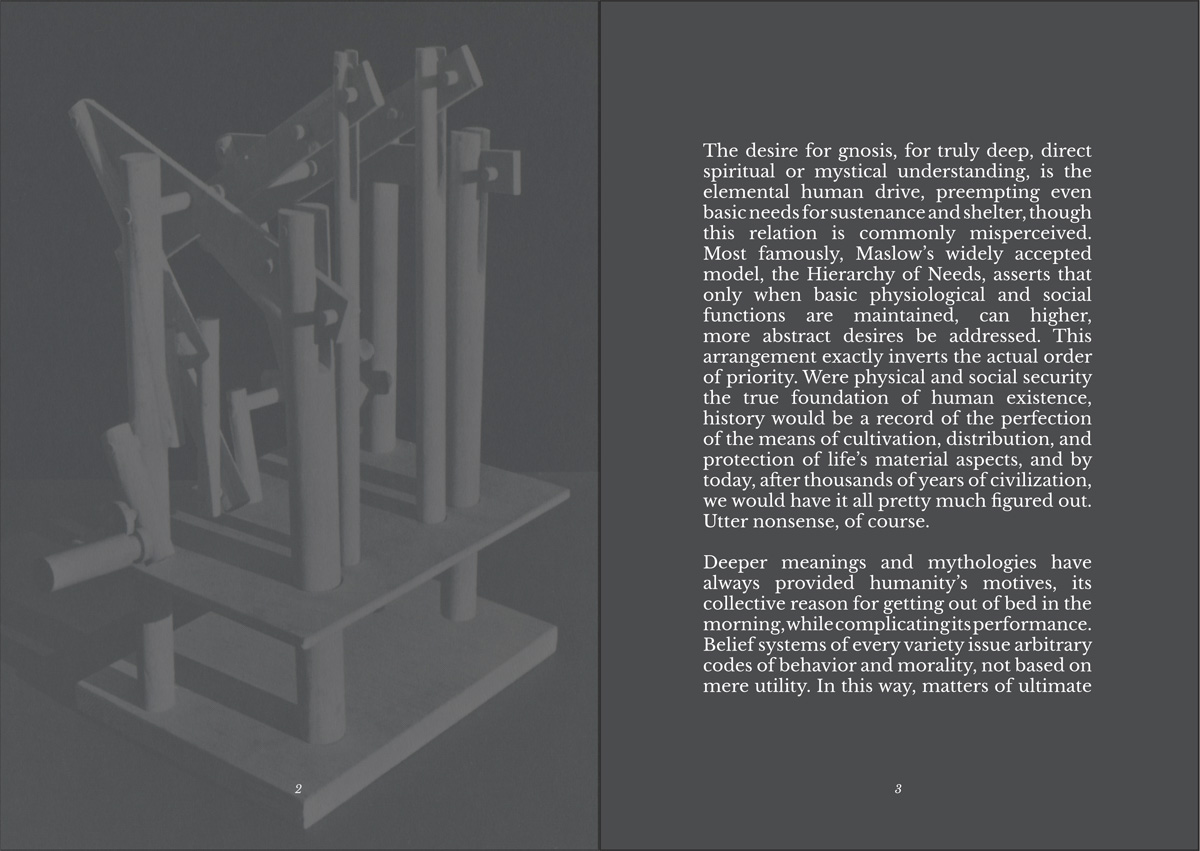